Like us on Facebook, follow us on Twitter! Check out our new tumblr page. :)
Manga News: Toriko has come to an end; but be sure to swing by and share your favourite moments from the series!
Manhwa & Manhua News: Check out the new Manhwa and Manhua shout-out (March 2016).
Event News: One Piece Awardshas concluded. Check the results Here!
MangaHelpers > Manga > Browse > Hammer Session!
Home
Chapters
Translations
RSS 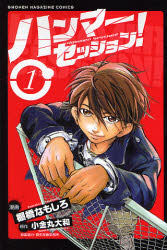 Two prisoners managed to escape after a police truck carrying them to prison crashed on the highway. One of them, Mr. Sawazaki, is a gangster who has sent ten of his enemy yakuza bosses to the hospital. The other, called "You" -- our protagonist -- is a con artist whose career in fraud has accumulated approximately 100 billion yen.

Desperate circumstances result in "You" and Sawazaki posing respectively as a new teacher and a groundskeeper for a nearby high school in order to avoid the police. Assuming the name "Takeda Shindo," he enters a contract with the headmaster to execute a series of "hammer sessions" with the problem students in the school -- education through the school of hard knocks, utilizing "You's" skills as a professional fraud.