Like us on Facebook, follow us on Twitter! Check out our new tumblr page. :)
Manga News: Toriko has come to an end; but be sure to swing by and share your favourite moments from the series!
Manhwa & Manhua News: Check out the new Manhwa and Manhua shout-out (March 2016).
Event News: One Piece Awardshas concluded. Check the results Here!
MangaHelpers > Manga > Browse > Izayakaku
Home
Chapters
Translations
RSS 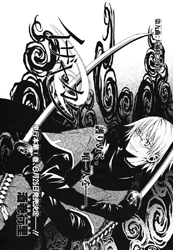 The war between the two clans intensifies. Most of the Genji (Minamoto Clan) have fallen, and were taken as captives. Among them was the young Yoritomo, a surviving successor of the Minamoto Clan. Yoritomo was pardoned by the head of the Taira Clan and was exiled to Hirugakojima, a small island in the Izu province. Yoritomo lived a peaceful and contented life in exile and never once thought of taking revenge.

One day, a monk was sent to the same island, supposedly banished for insolence towards the Emperor. Incidentally, this ill-mannered monk called Mongaku is Yoritomo's acquaintance. Mongaku meets Yoritomo and tries to convince him that the time has come to take revenge on the Taira. However, Yoritomo shuns Mongaku’s words….