Like us on Facebook, follow us on Twitter! Check out our new tumblr page. :)
Manga News: Toriko has come to an end; but be sure to swing by and share your favourite moments from the series!
Manhwa & Manhua News: Check out the new Manhwa and Manhua shout-out (March 2016).
Event News: One Piece Awardshas concluded. Check the results Here!
MangaHelpers > Manga > Browse > Kikaitonchibanashi Hanasaka Ikkyuu
Home
Chapters
Translations
RSS 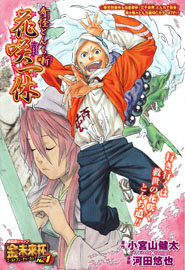 One-shot published in [2010-34]. Another oneshot from the world of Kikai Tonchibanashi - Hanasaka Ikkyuu.

Long ago, there was an ayakashi who challenged his victims to a battle of wits. If the subject succeeded, the ayakashi would grant them one wish, but if they lost, he would devour their soul. Only one person has been able to consistently defeat this ayakashi and his tricks: the clever Hanasaka Ikkyuu. The ayakashi follows him, ever eager to eat his soul, but for Ikkyuu, using the ayakashi's power to help others is worth the risk! In this story, he's called on to use the ayakashi's power for healing a sick little boy who's friends with a red-haired goddess from a hanging scroll.