Like us on Facebook, follow us on Twitter! Check out our new tumblr page. :)
Manga News: Toriko has come to an end; but be sure to swing by and share your favourite moments from the series!
Manhwa & Manhua News: Check out the new Manhwa and Manhua shout-out (March 2016).
Event News: One Piece Awardshas concluded. Check the results Here!
MangaHelpers > Manga > Browse > Oku-sama wa Joshi Kousei
Home
Chapters
Translations
RSS 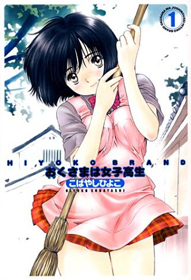 My Wife is a High School Girl (おくさまは女子高生, Oku-sama wa Joshi Kōsei?) is a Japanese manga series created by Hiyoko Kobayashi centering around a couple whose age difference makes it difficult for them to further their relationship, as one is a high school girl and the other is her physics teacher. The series first began as a manga serialized in Young Jump published by Shueisha. Also, a video game ported for the Playstation 2 and also the Sega Dreamcast were released based on the series. Later the series was adapted into an anime series that aired in Japan between July 3, 2005 and September 25, 2005, containing 13 episodes, with each episode containing two mini-episodes.