Like us on Facebook, follow us on Twitter! Check out our new tumblr page. :)
Manga News: Toriko has come to an end; but be sure to swing by and share your favourite moments from the series!
Manhwa & Manhua News: Check out the new Manhwa and Manhua shout-out (March 2016).
Event News: One Piece Awardshas concluded. Check the results Here!
MangaHelpers > Manga > Browse > Quantum Twin
Home
Chapters
Translations
RSS 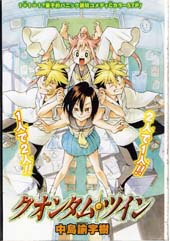 First year karate club member and karaoke enthusiast Gyouji doesn’t like the sound of his own voice or the way he looks on video – which he attributes to the medium more than himself. So when a science club experiment randomly zaps him with a special lightning beam that splits him into two exact copies, he has no excuses for his shortcomings as he’s confronted with himself (though that doesn’t stop him from assuming the other is an inferior copy). Joined with friends Koyoi and Haitani, an overzealous science club president Mahiru, who wants to cure him by joining him to a mutated octopus, and a family that doesn’t quite seem to notice that there are two of him, Gyouji will have to learn to get along with himself – in the flesh. [applezoid]