Like us on Facebook, follow us on Twitter! Check out our new tumblr page. :)
Manga News: Toriko has come to an end; but be sure to swing by and share your favourite moments from the series!
Manhwa & Manhua News: Check out the new Manhwa and Manhua shout-out (March 2016).
Event News: One Piece Awardshas concluded. Check the results Here!
MangaHelpers > Manga > Browse > Rokuyoku
Home
Chapters
Translations
RSS 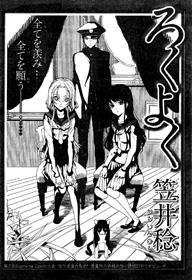 Yoshika and Yukina are best friends at school. Yukina is both physically beautiful and possesses a kind and gentle personality that charms everyone who knows her, including her wonderful boyfriend. Yoshika is less traditionally beautiful and has a less alluringly feminine personality. In addition, she desperately likes Yukina's boyfriend. While Yoshika does care for her friend, she is also deeply envious of her. One day, a demon in the form of a house cat appears to Yoshika and offers her the supernatural power to take whatever she wants from her friend. How far will Yoshika let her jealousy of her best friend take her? [tethysdust]

Published in the August issue of Jump SQ19.