Like us on Facebook, follow us on Twitter! Check out our new tumblr page. :)
Manga News: Toriko has come to an end; but be sure to swing by and share your favourite moments from the series!
Manhwa & Manhua News: Check out the new Manhwa and Manhua shout-out (March 2016).
Event News: One Piece Awardshas concluded. Check the results Here!
MangaHelpers > Manga > Browse > -SINS-
Home
Chapters
Translations
RSS 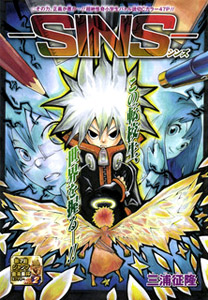 Sara Tanjuro just recently transferred to Mikagami Eruma’s elementary school and have caused a major stir among the students. Tanjuro, knicknamed Satan, has been proposing his love to the girls left and right, something the shy Eruma would never think of doing. But Satan has a secret identity. He is a member of Michaela, a group of people who combine technology and exorcism to rid the world of angels that wreak havoc in society. As member number 666, Satan is an anti-angel specialist who has disguised the school supplies as weapons. He defeats supernatural beings with ease. Now if getting girls were that easy... [vyc]

Note: Published in Weekly Shounen Jump [2011-33] and participating in the Golden Future Cup as entry #2.