Like us on Facebook, follow us on Twitter! Check out our new tumblr page. :)
Manga News: Toriko has come to an end; but be sure to swing by and share your favourite moments from the series!
Manhwa & Manhua News: Check out the new Manhwa and Manhua shout-out (March 2016).
Event News: One Piece Awardshas concluded. Check the results Here!
MangaHelpers > Manga > Browse > Valkyria Chronicles
Home
Chapters
Translations
RSS 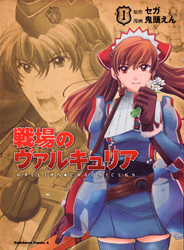 In an alternate Earth, the armies of the Imperial Alliance have ravaged the entire Europan continent in 1935 EC during the Second Europan War. In the middle of the war, the army invades Gallian territory to acquire a mineral known as ragnite. Standing in their way is a recently drafted militia officer named Welkin Gunther, son of known Europan War hero, Belgen Gunther. Based on the game of the same name, this is a manga representation of the PS3 title. Has some slight differences with the game, but is generally the same story.