Like us on Facebook, follow us on Twitter! Check out our new tumblr page. :)
Manga News: Toriko has come to an end; but be sure to swing by and share your favourite moments from the series!
Manhwa & Manhua News: Check out the new Manhwa and Manhua shout-out (March 2016).
Event News: One Piece Awardshas concluded. Check the results Here!
MangaHelpers > Manga > Browse > Anjuu no Chi
Home
Chapters
Translations
RSS 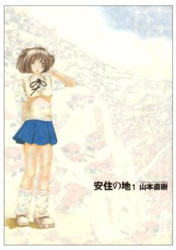 At a war torn country, a strange girl arrives at an abandoned village. There, she meets a strange white haired watchman of the West, Nishi, and a perverted watchman of the East, Higashi. To go on with the trend, the girl decides to name herself Minami. Together, Higashi, Nishi and Minami try to cope with the tragedy of war, along with various people who end up in the village.