Like us on Facebook, follow us on Twitter! Check out our new tumblr page. :)
Manga News: Toriko has come to an end; but be sure to swing by and share your favourite moments from the series!
Manhwa & Manhua News: Check out the new Manhwa and Manhua shout-out (March 2016).
Event News: One Piece Awardshas concluded. Check the results Here!
MangaHelpers > Manga > Browse > Arahabaki
Home
Chapters
Translations
RSS 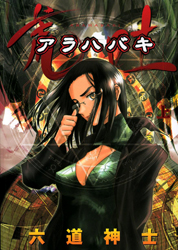 A clan of men and women with occult capabilities, who refer to themselves as "Kureha", were in the service of the most powerful people and had occupied themselves, since antiquity, with the most difficult missions possible. They have now almost completely died out.

In modern day Japan, Amanagi Shizuka, whose mother betrayed Kureha and was executed, has started her fight with the clan. She is determined to destroy Kureha, not only for revenge for the death of her mother, but also to fulfill her mother's plans. The current Kureha leader, Houhashi Rin, was a close friend of Shizuka's when they were children. Now she must find a way to face her old friend, who has become her new enemy.