Like us on Facebook, follow us on Twitter! Check out our new tumblr page. :)
Manga News: Toriko has come to an end; but be sure to swing by and share your favourite moments from the series!
Manhwa & Manhua News: Check out the new Manhwa and Manhua shout-out (March 2016).
Event News: One Piece Awardshas concluded. Check the results Here!
MangaHelpers > Manga > Browse > Archlord
Home
Chapters
Translations
RSS 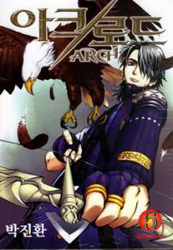 The great warrior Leon Manas, son of the legendary Nathan Manas, now carries the powerful sword Brumhart. Though this blade is coveted by many, only the heirs to the House of Manas can wield it. But that doesn’t stop the sinister from trying. Ernan, once trusted knight of the House of Manas, murders his commander, robs him of Brumhart and orders the death of Leon’s only son, Zian. But the men sent to perform this infanticide come up against a mysterious figure in a dark cloak who defeats them only to disappear with the child into the thick of the Tass Forest. Sixteen years later, Ernan has become a feared tyrant, but still has not been able to unsheathe Brumhart. Thus begins the tale of this desperate king and the young boy who would become one.

Note: This Manhwa is based on the MMORPG.