Like us on Facebook, follow us on Twitter! Check out our new tumblr page. :)
Manga News: Toriko has come to an end; but be sure to swing by and share your favourite moments from the series!
Manhwa & Manhua News: Check out the new Manhwa and Manhua shout-out (March 2016).
Event News: One Piece Awardshas concluded. Check the results Here!
MangaHelpers > Manga > Browse > Asuka Hybrid
Home
Chapters
Translations
RSS 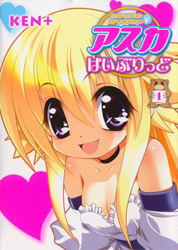 The story begins when the protagonist, Asuka, transfers to a dormitory, but after meeting his roommate, Asuka realises that someone must have confused his gender and assigned him to the women's dormitory. Asuka's roommate, Yayoi, says that there's no problem with Asuka living in the women's dormitory and quickly brings out complementary articles of clothing so that Asuka can crossdress. Asuka tells Yayoi that he'll think about it, and runs out of there like a bat out of hell. Outside in a park, Asuka bemoans his current state of affairs until some weirdly-dressed woman appears, and after listening to Asuka's plight about being assigned to the wrong dormitory, the mysterious women decides to fix things by transforming Asuka into a girl before running off. Then Yayoi appears and finds the newly transformed Asuka and becomes confused because Yayoi thought Asuka was a boy. Asuka explains to Yayoi what happened, and Yayoi believes everything and points out that now there is no problem with Asuka living in the women's dormitory. Later, in the dormitory, Asuka has an overwhelming urge to pee, and enters the bathroom while Yayoi is taking a shower and Asuka finds out that Yayoi is really a guy. Though, to be clear, Yayoi explains that he isn't crossdressing but rather wearing his uniform. Asuka then becomes worried about being in the same room as Yayoi, so Yayoi also points that that he is a homosexual who is interested in nothing but hot bishounen. So now Asuka is living in the women's dormitory while trying to find the mysterious woman again so that Asuka can change back to normal with the help of Yayoi who, of course, has an ulterior motive for helping Asuka.

As for the way the content and story is presented in this manga, it could simply be explained as a wish fulfilment-type transgender story by the author. According to what I understand in the afterword, Ken+ says that Asuka has all of Ken+'s interests and hobbies and is basically some fantasy version of Ken+, and that Yayoi is based off some guy Ken+ saw in middle school who he thought would look cute if he was a girl. This knowledge sheds an interesting light on all of the sadomasochistic/lesbian stuff in Ken+'s previous work.

I really liked this manga. It is very appealing and charming. My only problem with it is that it hasn't been updated since 2009. Permalink " "