Like us on Facebook, follow us on Twitter! Check out our new tumblr page. :)
Manga News: Toriko has come to an end; but be sure to swing by and share your favourite moments from the series!
Manhwa & Manhua News: Check out the new Manhwa and Manhua shout-out (March 2016).
Event News: One Piece Awardshas concluded. Check the results Here!
MangaHelpers > Manga > Browse > Ayu Mayu
Home
Chapters
Translations
RSS 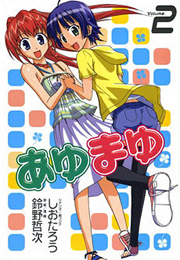 Yousuke and his sister were orphaned at a young age. Yousuke's sister was adopted ten years before the start of the story, since then, he has been looking for her. One day Yousuke found the couple that adopted his sister, the problem is that they have two daughters, Ayu and Mayu, both of which were adopted from the same orphanage and are roughly the same age. Both Ayu and Mayu had an older brother before being adopted. Things get more complicated when Yousuke learns that the orphanage where he previously lived was burned down a year earlier, destroying all the records, and that the couple's own records have disappeared. Yousuke must figure out which one of the girls is in fact his sister.