Like us on Facebook, follow us on Twitter! Check out our new tumblr page. :)
Manga News: Toriko has come to an end; but be sure to swing by and share your favourite moments from the series!
Manhwa & Manhua News: Check out the new Manhwa and Manhua shout-out (March 2016).
Event News: One Piece Awardshas concluded. Check the results Here!
MangaHelpers > Manga > Browse > Bari Haken
Home
Chapters
Translations
Thread
RSS 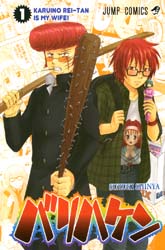 Is the story about an Otaku that turns out to be the leader of a bunch of delinquents, but he's hiding his true self. His goal, get a girlfriend like his Anime characters.

"Mitani"
Mitarashi Dango was a typical otakuthat love his figures & dating games and other elements occupied his time. That is, until one day the boss of a strong gang breaks his favorite bishoujo figure, causing Dango to go berserk and beat him to the ground. After being unwillingly appointed to be the gang's new boss, Dango must now manage to juggle two lives as a closet otaku and one as the fearful boss of a powerful gang. To prove his might Dango must compete in all kinds of sporting events and demonstrate his strength by lifting fifteen people with his power - the power he doesn't actually have
Permalink " "