Like us on Facebook, follow us on Twitter! Check out our new tumblr page. :)
Manga News: Toriko has come to an end; but be sure to swing by and share your favourite moments from the series!
Manhwa & Manhua News: Check out the new Manhwa and Manhua shout-out (March 2016).
Event News: One Piece Awardshas concluded. Check the results Here!
MangaHelpers > Manga > Browse > Basquash!
Home
Chapters
Translations
RSS 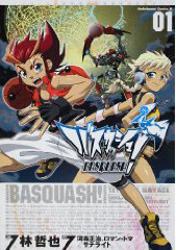 The story takes place in the world of "Earth Dash", an alternate version of Earth where human society is far more advanced on the moon than on the planet's surface. A popular sport is BFB (Big Foot Basketball), where players ride mecha called "Big Foot" in a giant basketball arena, playing basketball. In the city of Rolling Town, Dan JD and his companions took the sport to the streets, which was renamed "Basquash", and they embark on a journey to overcome their hardships of the past and make their dreams come true.