Like us on Facebook, follow us on Twitter! Check out our new tumblr page. :)
Manga News: Toriko has come to an end; but be sure to swing by and share your favourite moments from the series!
Manhwa & Manhua News: Check out the new Manhwa and Manhua shout-out (March 2016).
Event News: One Piece Awardshas concluded. Check the results Here!
MangaHelpers > Manga > Browse > Belle Starr's Band of Outlaws
Home
Chapters
Translations
RSS 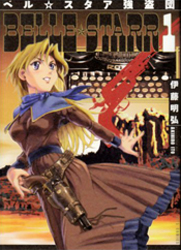 A manga based on the life of the notorious American outlaw Belle Starr (who lived from 1848-1889).  After a series of troubles have left her a "wanted" woman, she finds herself with a Cherokee protector called Sam Starr. Will she and Sam be able to survive as outlaws in the wild west?
[tethysdust]