Like us on Facebook, follow us on Twitter! Check out our new tumblr page. :)
Manga News: Toriko has come to an end; but be sure to swing by and share your favourite moments from the series!
Manhwa & Manhua News: Check out the new Manhwa and Manhua shout-out (March 2016).
Event News: One Piece Awardshas concluded. Check the results Here!
MangaHelpers > Manga > Browse > Boy of the Female Wolf
Home
Chapters
Translations
RSS

Boy of the Female Wolf 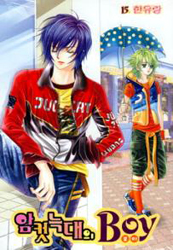 Eun-soo Cha is the main character of the story. Eun-soo has hated her Mother ever since she was abandoned by her. Raised by her Grandma, she became a wild child that likes to fight. She has even disguised herself so well as a guy that people won't believe her even if she says she's a girl. She can fight well, and is even referred to as hot by girls. One day, however, her Grandma's already bad health worsens, and she promises not to fight anymore. When Eun-soo's grandma dies soon after, she decides to leave Dae-Jeon (where she lives) and goes to Seoul to live with her Mother, despite still hating her, because she has nowhere else to go. There, she runs into one of the best fighters, at her new school, and immediately gets on his bad side. What will happen? Will she break her promise to her grandma? Will love bloom?