Like us on Facebook, follow us on Twitter! Check out our new tumblr page. :)
Manga News: Toriko has come to an end; but be sure to swing by and share your favourite moments from the series!
Manhwa & Manhua News: Check out the new Manhwa and Manhua shout-out (March 2016).
Event News: One Piece Awardshas concluded. Check the results Here!
MangaHelpers > Manga > Browse > "Bungaku Shoujo" to Shinitagari no Pierrot
Home
Chapters
Translations
RSS

"Bungaku Shoujo" to Shinitagari no Pierrot 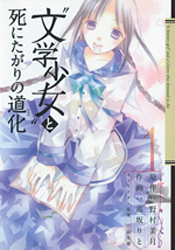 Adapted from the Light Novel series by Nomura Mizuki.

The two of them are the only members of the Literature Club. Each day he writes short stories for her to eat. Until one day Tooko arbitrarily decided to put up a drop box for anyone with a problem...