Like us on Facebook, follow us on Twitter! Check out our new tumblr page. :)
Manga News: Toriko has come to an end; but be sure to swing by and share your favourite moments from the series!
Manhwa & Manhua News: Check out the new Manhwa and Manhua shout-out (March 2016).
Event News: One Piece Awardshas concluded. Check the results Here!
MangaHelpers > Manga > Browse > Café Occult
Home
Chapters
Translations
RSS 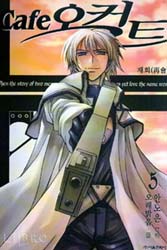 On her way home from shopping around, Suh Rin meets with an unfortunate end when she is hit by an on coming truck. The next thing she knows, she’s being abducted by a stranger. Overwhelmed by the fact she had just been killed, Suh Rin has difficulty grasping the fact that she has entered a new existence in a realm of spirits. More importantly, she has yet to realize that tremendous supernatural powers lie within her… a power great enough to make her the target of abductions by tremendously powerful people within the spirit realm.

However, thanks to Young and the mysterious owner of a café called Café Occult, Suh Rin is rescued from a new existence as someone’s servant. On the contrary, she joins Young on action packed thrills in which she assists Young fulfill requests as an ‘errand boy’ taking care of special requests by clients in a lawless world controlled only by power.