Like us on Facebook, follow us on Twitter! Check out our new tumblr page. :)
Manga News: Toriko has come to an end; but be sure to swing by and share your favourite moments from the series!
Manhwa & Manhua News: Check out the new Manhwa and Manhua shout-out (March 2016).
Event News: One Piece Awardshas concluded. Check the results Here!
MangaHelpers > Manga > Browse > Chocolat
Home
Chapters
Translations
RSS 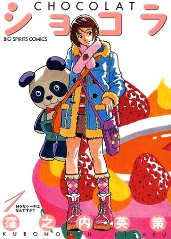 Chocolat is a mature comedy series about half-orphan Tatsumi Chiyoko whose father was caught in huge debt. Now living with Omugi Matsukichi, an ex-underground king who opened a pastry shop, she gets to know people like Katou Ichigo, an ex-inmate. With people after her father's whereabouts, what will happen to her?