Like us on Facebook, follow us on Twitter! Check out our new tumblr page. :)
Manga News: Toriko has come to an end; but be sure to swing by and share your favourite moments from the series!
Manhwa & Manhua News: Check out the new Manhwa and Manhua shout-out (March 2016).
Event News: One Piece Awardshas concluded. Check the results Here!
MangaHelpers > Manga > Browse > Comic Studio
Home
Chapters
Translations
RSS 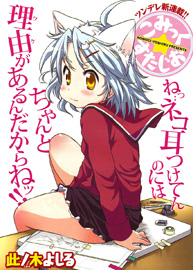 20-year-old Aihara Minoru has come to Tokyo to make his dreams of becoming an action manga artist come true. To his amazement, he lands a job as a live-in assistant of his favorite mangaka, Takakura Kenji, who writes a popular fighting manga called "Ultimate Banchou."

Upon arriving at his new workplace, however, he discovers that his idol is not the tough guy he'd always imagined. The truth is, Takakura Kenji is the pen name of Sekai Ichiko, a girl his age who is basically a moe character (she looks and acts like a little kid). After Aihara's obvious disappointment starts them off on the wrong foot, it's going to be tough for him to prove to her that he has what it takes to be a manga artist!
[tethysdust]