Like us on Facebook, follow us on Twitter! Check out our new tumblr page. :)
Manga News: Toriko has come to an end; but be sure to swing by and share your favourite moments from the series!
Manhwa & Manhua News: Check out the new Manhwa and Manhua shout-out (March 2016).
Event News: One Piece Awardshas concluded. Check the results Here!
MangaHelpers > Manga > Browse > Cowboy Bebop
Home
Chapters
Translations
RSS 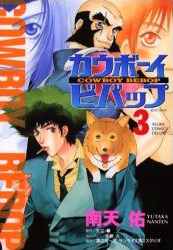 Aboard the spaceship known as the Bebop, four unlikely bounty hunters try to make a living by taking up jobs that no sane person would accept. The Bebop's crew consists of Spike Spiegel, a smooth-talking, ass-kicking former member of a dangerous crime syndicate; Jet Black, a gruff but intelligent former member of the space police; Faye Valentine, a dangerous beauty with a mysterious past; and Edward, a strange girl with exceptional hacking abilities. This manga series features a collection of side stories that are seperate from the anime series. Taking place before the ending of the series, Spike, Faye, Jet, Ed and Ein continue their bounty hunting adventures. The crew grapples with wimpy bounties, interlopers and characters from their pasts never covered in the anime. The chapters are episodic, side stories of the Cowboy Bebop anime.

Spike, Jet, Faye, and Ed - cowboys on the new frontier. Together this band of interplanetary bounty hunters takes on the jobs that anyone in their right mind would turn down.