Like us on Facebook, follow us on Twitter! Check out our new tumblr page. :)
Manga News: Toriko has come to an end; but be sure to swing by and share your favourite moments from the series!
Manhwa & Manhua News: Check out the new Manhwa and Manhua shout-out (March 2016).
Event News: One Piece Awardshas concluded. Check the results Here!
MangaHelpers > Manga > Browse > Daikusei Kuuki Heishidan
Home
Chapters
Translations
RSS 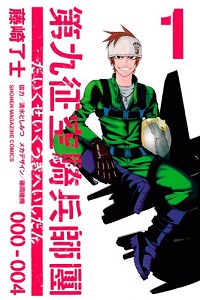 Even though the war has already ended, the sky has always been full of fighter planes for Iono Akatsuki. But he never really cared why. He just went to school and carried on with his life. Akatsuki has always had better vision and body movements than the average human, but the most he got out of it was never losing a fist fight. His adopted brother, Seibu Tsubasa, who he met five years ago when they were both 9 years old and who has been like a real brother to him, on the other hand, is a genius who got his doctorate at the age of 9, and teaches Akatsuki’s class at the middle school.

But Akatsuki’s life changes when he learns about his Kigan or machine eyes, an ability only a handful of people in the world posses that allows the body to not have any limits. For example, one would be able to see at almost 360 degrees and process all the visual information available, while making decisions faster than an average human can even begin to imagine. Now as a pilot for the Warbird jets that he saw in the sky everyday, he has become the military’s secret weapon against the impending restart of the world war. [vyc]