Like us on Facebook, follow us on Twitter! Check out our new tumblr page. :)
Manga News: Toriko has come to an end; but be sure to swing by and share your favourite moments from the series!
Manhwa & Manhua News: Check out the new Manhwa and Manhua shout-out (March 2016).
Event News: One Piece Awardshas concluded. Check the results Here!
MangaHelpers > Manga > Browse > Dear Boys Act3
Home
Chapters
Translations
RSS 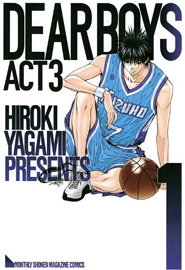 Mizuho High's basketball team has successfully fought into the quarter finals of the national tournament! Their opponent is Narita-Chuo led by coach Shimojo. This is the third time both teams are battling on the court following the practise game and the Newcomers Tournament. Destiny entwines both teams, neither of them wants to lose and both want to show how much they've grown. The battle begins! However Takumi's over eagerness to prove his worth backfires?