Like us on Facebook, follow us on Twitter! Check out our new tumblr page. :)
Manga News: Toriko has come to an end; but be sure to swing by and share your favourite moments from the series!
Manhwa & Manhua News: Check out the new Manhwa and Manhua shout-out (March 2016).
Event News: One Piece Awardshas concluded. Check the results Here!
MangaHelpers > Manga > Browse > Dragon Nest - Shungeki no Sedo
Home
Chapters
Translations
RSS 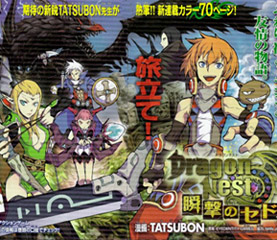 Based on the Massively Multiplayer Online Game (MMOG).

In a fantasy landscape full of dangerous magical creatures, three adventurers find themselves entangled in a quest to rescue Rose, a girl from a village. The first of the adventurers is the warrior Sedo, who makes up in enthusiasm what he lacks in skill. Despite her protests that she's already on an important quest, the pretty and competent elven archer Okiron gets dragged along in Sedo's enthusiasm. The last member of this group is the cowardly, furtive sorceress, Yuri. Will they be able to rescue Rose, or is her kidnapping more complicated than they had thought? [tethysdust]

The beautiful Goddess Altea, creator of the tranquil worlds of Lagendia, plummeted into unconsciousness after being poisoned by her jealous, evil sister Vestinel. The poison can only be neutralized by an antidote made from the source of the poison itself - Vestinel's magic grail - which has disappeared into Lagendia along with sinister Vestinel herself. Able to communicate to her people only through dreams, the Goddess Altea calls upon the Heroes of Lagendia, via all-knowing prophets, to find the grail and save her from her eternal slumber. In their quest, the bold warriors must comb the lands for enchanged Power Stones, which allow them to speak with the prophets and unlock the will of Altea through her dreams. But the hunt for the Power Stones is not for the meek, as since the Goddess Altea's poisoning, the formerly peaceful lands of Lagendia have become home to throngs of deadly dragons bent on thwarting the grail's discovery and keeping the land in despair.