Like us on Facebook, follow us on Twitter! Check out our new tumblr page. :)
Manga News: Toriko has come to an end; but be sure to swing by and share your favourite moments from the series!
Manhwa & Manhua News: Check out the new Manhwa and Manhua shout-out (March 2016).
Event News: One Piece Awardshas concluded. Check the results Here!
MangaHelpers > Manga > Browse > Girl Girl Ball Shoot Girl
Home
Chapters
Translations
RSS 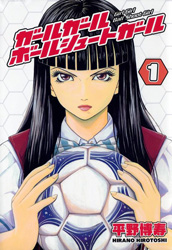 Mizuno Kaori attends an all-girls high school and likes to spend time with her friends after class playing football. They'd like to create a club, but they're one member short of creating a team and people think it's foolish for girls to play football. Studying at the same high school, Umezawa Hikari is very popular among the boys but doesn't talk much. What most people don't know is that she plays football pretty well and dreams of becoming a national player competing in the World Cup. She then joins Kaori's group with plans to challenge a boy's football team from another high school. If they can defeat the boy's team, then they can let people know that they really mean business and this will also serve as a small step towards her dream. [dareka]