Like us on Facebook, follow us on Twitter! Check out our new tumblr page. :)
Manga News: Toriko has come to an end; but be sure to swing by and share your favourite moments from the series!
Manhwa & Manhua News: Check out the new Manhwa and Manhua shout-out (March 2016).
Event News: One Piece Awardshas concluded. Check the results Here!
MangaHelpers > Manga > Browse > Hitomi no Catoblepas
Home
Chapters
Translations
Thread
RSS 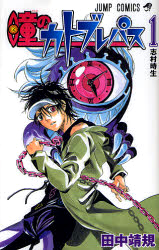 The story of a guy named Tokio, who's a descendant of a legendary family of youma (demon) fighters. He has the ability to freeze time because of the youma he has in his eye, Catoblepas. One day, he encounters a girl who became a target of a demon. Tokio, with his eye, will try to prevent the girl from becoming another victim of a string of mysterious events that have occured in the town as of late. Little does the girl know that Tokio is her next door neighbour.