Like us on Facebook, follow us on Twitter! Check out our new tumblr page. :)
Manga News: Toriko has come to an end; but be sure to swing by and share your favourite moments from the series!
Manhwa & Manhua News: Check out the new Manhwa and Manhua shout-out (March 2016).
Event News: One Piece Awardshas concluded. Check the results Here!
MangaHelpers > Manga > Browse > Kindaichi Case Files: The Evil Spirit of the Diving Pool
Home
Chapters
Translations
Thread
RSS

Kindaichi Case Files: The Evil Spirit of the Diving Pool 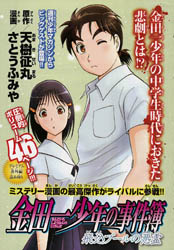 This is a One-Shot/Special/Bangaihen that was published in the July 2009 Issue of Shounen Rival. This is about the case of an evil spirit of the diving pool at the Junior High School that Kindaichi studied in when he was younger, and how he solved it.