Like us on Facebook, follow us on Twitter! Check out our new tumblr page. :)
Manga News: Toriko has come to an end; but be sure to swing by and share your favourite moments from the series!
Manhwa & Manhua News: Check out the new Manhwa and Manhua shout-out (March 2016).
Event News: One Piece Awardshas concluded. Check the results Here!
MangaHelpers > Manga > Browse > Kurenai no Ookami to Ashikase no Hitsuji
Home
Chapters
Translations
RSS 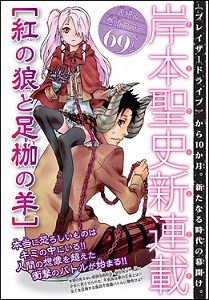 All humans are wolves in sheep's clothing and the same applies to Douchinji Youichi, a boy who always daydreams about various things, but never says anything out loud. One day, upon seeing a red full moon, a girl came dashing at him before punching him with a silver knuckle, knocking him unconscious and unable to really remember the incident. The next day, a new student, Akatsuki Ayame, joins his class.

On his way home, Youichi discovers that the girl who punched him is Ayame, and her silver knuckle draws out what she calls a "wolf", a person's inner thoughts or desires, from a "sheep", the superficial mask which restrains the inner "wolf" from surfacing. However, when someone is full of desires and becomes obssessed with their inner thoughts, the "wolf" outgrows the "sheep" and the person will be able to see the World of Red Moon. The girl explains that she doesn't have a "sheep" and would like to have one, so she requests Youichi to become her "sheep". Youichi agrees to it, marking the beginning of a story of the red riding hood who devours the wolf.