Like us on Facebook, follow us on Twitter! Check out our new tumblr page. :)
Manga News: Toriko has come to an end; but be sure to swing by and share your favourite moments from the series!
Manhwa & Manhua News: Check out the new Manhwa and Manhua shout-out (March 2016).
Event News: One Piece Awardshas concluded. Check the results Here!
MangaHelpers > Manga > Browse > Loveless
Home
Chapters
Translations
Thread
RSS 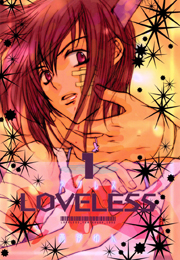 Aoyagi Ritsuka is one troubled 6th grader. Two years ago, he mysteriously lost his memory and developed an alternate personality. His mother constantly berates (and occasionally beats) him, asking what happened to the "real" Ritsuka, and his only defender and friend, his older brother Seimei, was recently killed. Suddenly, Seimei's apparent "friend," Soubi, appears. Soubi tells him that Ritsuka's true name is "Loveless," and that Soubi was assigned by Seimei to take care of Ritsuka and protect him. Ritsuka soon gets sucked into a bizzare underground society where teams of people, a "Fighter Unit," and a "Sacrifice," battle using elaborate and beautifully-phrased spells. He seeks both acceptance of himself, and the answer to the mystery of who killed his brother and why.