Like us on Facebook, follow us on Twitter! Check out our new tumblr page. :)
Manga News: Toriko has come to an end; but be sure to swing by and share your favourite moments from the series!
Manhwa & Manhua News: Check out the new Manhwa and Manhua shout-out (March 2016).
Event News: One Piece Awardshas concluded. Check the results Here!
MangaHelpers > Manga > Browse > Mashima-en
Home
Chapters
Translations
RSS 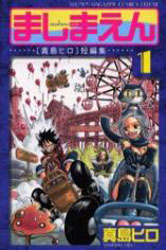 A collection of one-shots by Mashima Hiro

Vol 1:
Magician - Tsukimine Aoi is the club leader of the Magicians Club at his boys-only school. His club is in danger of being terminated because they lack members, and the only way of keeping his club alive, he needs to either find new members or help out the school principle find his "dog". As Aoi and his friends come closer to finding the dog, Aoi's secret powers are revealed...

Fairy Tale - The tale sets off in the world cut into four kingdoms, each inhabited by people of the elements: fire, water, earth, and wind. Our hero, Silva, is the son of the king of the fire kingdom. With the help of El, the daughter of the queen of the water kingdom, Silva sets out on his journey to find the true potential in himself and prove his worth.

Plue's Adventures Pt. II - In the mystical world of Candyland, the legendary Candy Orb has been stolen! It's up to you to help out Plue find the evil person that stole the Candy and Orb and restore peace back into Candyland! (You choose your storyline in this manga by choosing which frame to skip to by the labels.)

Vol 2:
Bad Boys Song - Mikiya and his 3 delinquent friends are infamous throughout their school, especially to the teachers. In the last three months before they graduate, they decide they wanted to do something big. Mikiya comes up with the idea to do a concert at school. The problem is... none of them have any experience with any instrument. With a few of the teachers vehemently trying to stop their concert, will they be able to realize their goal?

Magic Party - In the world of Grumrush, people live with magic. Elena is an apprentice magician, training to become a full fledged magician. She must find the book that teaches the ultimate wind magic in order to become a real magician.

Christmas Hearts - Christmas is near! And above the clouds, hundreds of Santa Clauses and their assistants work diligently to make dreams come true for kids around the world. But there are these "nightmare" creatures that plot to stop the Santa Clauses from distributing the presents. Can our kid Santa be able to save the day?

Fighting Group Mixture - We have the evil villains kidnapping kids around the world doing evil stuff, and we have the Power Ranger-esque heroes saving the day. Each district has its own hero sentai, and each one of them has to please their sponsors and the viewers that support them on TV. This story follows the career of one boy destined to become one of the greatest heroes ever.