Like us on Facebook, follow us on Twitter! Check out our new tumblr page. :)
Manga News: Toriko has come to an end; but be sure to swing by and share your favourite moments from the series!
Manhwa & Manhua News: Check out the new Manhwa and Manhua shout-out (March 2016).
Event News: One Piece Awardshas concluded. Check the results Here!
MangaHelpers > Manga > Browse > Wangan Midnight
Home
Chapters
Translations
RSS 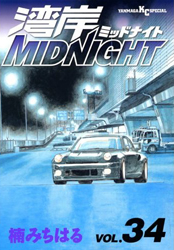 One day, Akio Asakura, a third year high school student, is driving his Fairlady Z (Z31) and is challenged by Tatsuya Shima, a doctor, in his black Porsche 964 Turbo (nicknamed the "BlackBird"). With a friend in the passenger seat and two girls in the back, Akio pitifully tries to win, but is defeated. Determined to become faster, he goes to the junkyard to buy parts for his car, when he sees a pristine, unscratched midnight blue Fairlady Z (S30) in the junkyard. Intrigued as to why such a machine is about to be junked, he buys it. He soon finds that the car is unnaturally fast due to a tuned L28 engine, bored and stroked to 3.1 liters combined with twin turbos, which produces 620bhp. He also finds that all of the car's previous owners had unfortunate accidents in it, starting with the first owner's death.

The manga follows Akio's various encounters, though the central plot revolves around his constant battle with the BlackBird for superiority.
[wikipedia]