Like us on Facebook, follow us on Twitter! Check out our new tumblr page. :)
Manga News: Toriko has come to an end; but be sure to swing by and share your favourite moments from the series!
Manhwa & Manhua News: Check out the new Manhwa and Manhua shout-out (March 2016).
Event News: One Piece Awardshas concluded. Check the results Here!
MangaHelpers > Manga > Browse > 1/2 Prince
Home
Chapters
Translations
Thread
RSS 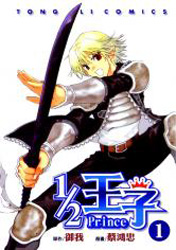 It is the year 2100A.D., humans have developed a virtual reality game. Feng lan, due to a bet with her brother, vows to beat the game without using her "female benefits". Due to this, she becomes the first transvestite of "Second Life".

If you liked One Piece or Naruto then you'll probably like this manga as well.
This is the most promising Chinese manga of the day.

The action is good , the humor is good and the story is great too, only the art is so-so.

There's a big variety of characters for you to fall in love with.

i love this manga its cute and i think its funny how much girls drool all over her since she is a hot guy in the game,and its cute how she meets all these people but they dont know that she is a girl and the funniest is there is a guy who is gay drooling over her as a guy who is really hot Permalink " "
Review by sukai

I was skeptical of the manga at first, since it's premise was about an online virtual rpg game, a story done before like in Hack which I didn't like. But for some reason, the manga's unique take has kept me reasonably interested in the manga.

Though the story is nothing special, I would still recommend this for those that's bored to their wits end with no other manga to read. Permalink " "
Review by Reff

Any MMORPG player out there will love this manhwa. As a transvestite, the main character (whose real life is a girl) builds up her male character in unique and different way than normal player in the game. Because she makes her character very handsome (bishounen), it attracts the crowd (with the girls chasing him and the boys hate him for that), making a huge deal of reputation for both Online World and Real World. There's many comedic scenes throughout the manhwa, and there's also intense plot in the storyline such betrayal and sad scenes taking place.

Overall, its a great manhwa to read. This manhwa is based on the Novel made by Yu Wo, where the novel includes every details and explanations, and the manhwa is the visualization for it (with less detail).

I recommend you read the manhwa first, and if you liked it, then read the novel. Permalink " "
Review by LeTVaSH07

kyaaaa!! i love 1/2 prince!! it has so many bishies!! gyahahaha! i would recommend this to all bishie lovers! and to all of you!! haha! you will like this manga! it's so good!! Permalink " "
Review by Miles37

Awesome Manga! if you like funny situations, action, and Sci-Fi you'll love this. Permalink " "
Review by Euniceshihui

Super jealous she is so good at mmorpg like game well you know the urg whatever is that.Still,unlike Hack which well is like mmorpg games which I fell asleep reading it,this 1/2 Prince manhua keep me awake with it thrills,surprises and comedy. Permalink " "