Like us on Facebook, follow us on Twitter! Check out our new tumblr page. :)
Manga News: Toriko has come to an end; but be sure to swing by and share your favourite moments from the series!
Manhwa & Manhua News: Check out the new Manhwa and Manhua shout-out (March 2016).
Event News: One Piece Awardshas concluded. Check the results Here!
MangaHelpers > Manga > Browse > A Girls
Home
Chapters
Translations
RSS 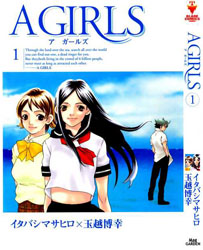 Kazao has always lived on a secluded island, along with other children who were abandoned by their parents. To Kazao's surprise, one day, he is told that his parents have been found, and that he must now go live with them. He is heartbroken to leave his friends and his life on the island, most especially Eiko, the girl he loves. Now he must face an outside world he has only ever seen on TV, in addition to living with parents he has never met. Almost too conveniently, he promptly meets a cute young girl named Yuu who instantly likes him and helps him adjust. Kazao is still surrounded by things he can't understand, though. For instance, why did his parents abandon him for sixteen years? What exactly is the island where he spent his childhood? And will he ever be able to find Eiko again? [tethysdust]