Like us on Facebook, follow us on Twitter! Check out our new tumblr page. :)
Manga News: Toriko has come to an end; but be sure to swing by and share your favourite moments from the series!
Manhwa & Manhua News: Check out the new Manhwa and Manhua shout-out (March 2016).
Event News: One Piece Awardshas concluded. Check the results Here!
MangaHelpers > Manga > Browse > Adolf
Home
Chapters
Translations
Thread
RSS 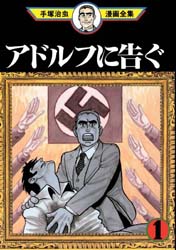 From wiki: The story of Adolf begins in 1936 as Japanese reporter Sohei Toge travels to Berlin to cover the Berlin Olympic Games. Upon arriving, he finds that his younger brother, who has been studying in Germany as an international student, has been murdered. Furthermore, all traces of information regarding his younger brother's study in Germany has vanished. It was as if he had never existed. Investigating the matter, it is later learned that his murder is connected to a document he mailed to Japan with information regarding Adolf Hitler. This information is crucial to the Third Reich as it contains proof that Adolf Hitler has Jewish blood.

A member of the Nazi Party living in Japan named Wolfgang Kaufmann is ordered to find the documents. He expects his son, Adolf Kaufmann, to become a strong supporter of Adolf Hitler. However, Adolf Kaufmann has no interest in Nazi Germany as it would mean the killing of his good friend, Adolf Kamil, who is Jewish.

As events progress, the lives of the three Adolfs intertwine and become more and more tangled as Sohei Toge searches for his brother's murderer.