Like us on Facebook, follow us on Twitter! Check out our new tumblr page. :)
Manga News: Toriko has come to an end; but be sure to swing by and share your favourite moments from the series!
Manhwa & Manhua News: Check out the new Manhwa and Manhua shout-out (March 2016).
Event News: One Piece Awardshas concluded. Check the results Here!
MangaHelpers > Manga > Browse > Akagi
Home
Chapters
Translations
RSS 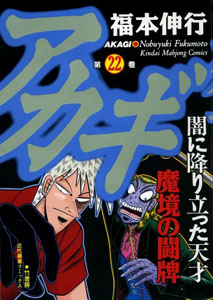 The story revolves around the Mahjong gambling exploits of Akagi Shigeru. After a death-defying game of chicken, Akagi nonchalantly enters a Yakuza Mahjong parlor to shake the cops' trail. Even unfamiliar with the rules of Mahjong, his gambling intuition is enough to save a small time gambler, Nangou, and grant him a seat at the gambling table. As the night progresses, the stakes are raised both within the game and for Akagi, who is under the suspicion of local police. However, Akagi overcomes the situation with his tactics, defiant of both life and chance. When he leaves the gambling house, no one present is in doubt of his genius.

During the story arc, Akagi faces and defeats several opponents in Mahjong, each with their own, distinct style of play. Akagi's genius allows him victory, ultimately defeating the "behind the stage king" of Japan and becoming a legend.