Like us on Facebook, follow us on Twitter! Check out our new tumblr page. :)
Manga News: Toriko has come to an end; but be sure to swing by and share your favourite moments from the series!
Manhwa & Manhua News: Check out the new Manhwa and Manhua shout-out (March 2016).
Event News: One Piece Awardshas concluded. Check the results Here!
MangaHelpers > Manga > Browse > Asashisu - Assassin Sisters
Home
Chapters
Translations
RSS 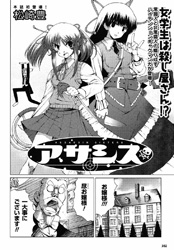 Assassination. That’s the only thing the Assassin Sisters do for a living. The older sister Tsukushi is a modest assassin that does her job. However, the younger sister, Ayame, wants to see the person who left her a love letter. Due to the fact that she smells of blood because of her job, Ayame isn’t able to go out with any guys. But before Ayame can give her reply to him, Tsukushi appears and declares that he is the next target to kill! What is Ayame going to do: do her job as an assassin and kill the boy who loves her or rescue him from his sister!? [Mamo]