Like us on Facebook, follow us on Twitter! Check out our new tumblr page. :)
Manga News: Toriko has come to an end; but be sure to swing by and share your favourite moments from the series!
Manhwa & Manhua News: Check out the new Manhwa and Manhua shout-out (March 2016).
Event News: One Piece Awardshas concluded. Check the results Here!
MangaHelpers > Manga > Browse > between Haru and Natsu, I am...
Home
Chapters
Translations
RSS

between Haru and Natsu, I am... 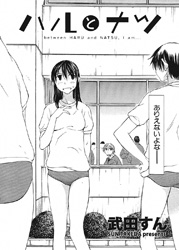 Makoto meets a sweet, shy girl named Haruna helping out at the school's athletics festival. He confesses his feelings for her the next time he sees her, and she bluntly rejects him, only to call him later and ask him out herself! The source of all these mixed signals is Haruna's "evil" twin sister, Natsumi. Natsumi is the opposite of Haruna, she's a forward, crude girl bent on taking whatever she can from her twin sister. Makoto is stuck in between Haruna and Natsumi, as they viciously fight over who will win him in the end. [tethysdust]

It's pretty good but they're not uploading anymore Permalink " "