Like us on Facebook, follow us on Twitter! Check out our new tumblr page. :)
Manga News: Toriko has come to an end; but be sure to swing by and share your favourite moments from the series!
Manhwa & Manhua News: Check out the new Manhwa and Manhua shout-out (March 2016).
Event News: One Piece Awardshas concluded. Check the results Here!
MangaHelpers > Manga > Browse > Birthday
Home
Chapters
Translations
RSS 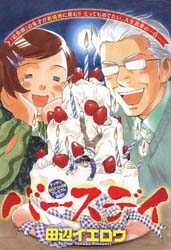 Hiroshi is weak when it comes to his parents. He doesn't hate his parents nor do his parents abuse him. Actually, its the exact opposite; he dislikes being spoiled by his parents. Because his parents had him at a fairly old age, his parents idolize him and gives him too much affection. They hold fancy birthday parties, preserve his art projects in a glass case, make him extra-large puddings, make banners for him even though he is on the bench, etc. They are just too much for Hiroshi who just wants to be an ordinary high school student. On his 15th birthday, his parents give him the craziest present yet: a toy that will make him a hero. Can Hiroshi fulfill his wish to become an ordinary boy? Read & find out! A oneshot by Tanabe Yellow, the mangaka of Kekkaishi. [ruggia]

A sweet and comical story about a pair of parents who just don't know when to stop. Permalink " "