Like us on Facebook, follow us on Twitter! Check out our new tumblr page. :)
Manga News: Toriko has come to an end; but be sure to swing by and share your favourite moments from the series!
Manhwa & Manhua News: Check out the new Manhwa and Manhua shout-out (March 2016).
Event News: One Piece Awardshas concluded. Check the results Here!
MangaHelpers > Manga > Browse > Takkoku!!!
Home
Chapters
Translations
Thread
RSS 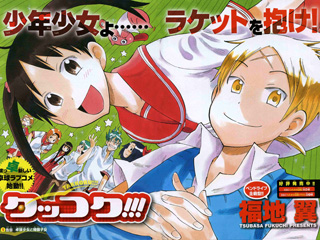 From the mangaka that brought you "The Law of Ueki" comes a new ping pong love comedy manga. Tamano Kako and Marunouchi Gaku were the best of friends, but Gaku had to leave with his father to travel the world. However, Gaku promised that if Kako waited, he would come back in 10 years and they would go out. However, right after Gaku left the law of Takkoku was created: If you confess your love to someone, you must beat them at a game of ping pong; if you touch each other before the game, that person will be punished. If you win, regardless of the other person's feelings, you automatically go out. However, Kako is called the best ping pong player in Japan and Gaku has never played ping pong before AND he wants to be the one that confesses. How will these two people's love flourish under these conditions? Will Gaku ever be able beat Kako at ping pong? Read this manga to find out~