Like us on Facebook, follow us on Twitter! Check out our new tumblr page. :)
Manga News: Toriko has come to an end; but be sure to swing by and share your favourite moments from the series!
Manhwa & Manhua News: Check out the new Manhwa and Manhua shout-out (March 2016).
Event News: One Piece Awardshas concluded. Check the results Here!
MangaHelpers > Manga > Browse > Bremen II
Home
Chapters
Translations
RSS 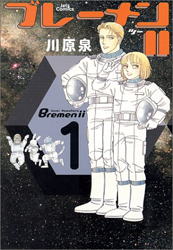 The year is 2306. Even in the 20th century, mankind has already shown potential to go beyond their Earthen atmosphere. The 21st century brought this potential into full-throttle, as mankind initiated their journey into the universe. Around the middle of the 22nd century, technological advancements in Hyper-Space Navigation and Gravity Manipulation brought about an explosive acceleration in space exploration as every man, woman, and animal scattered all over the universe. We were progressing from an Interplanetary Era into an Intergalactic Era.

With this expansion came with it consequences that we have already seen even from the 20th century: declining birth rates. Scattered all over the universe, humanity needed every man and woman to work constantly to keep up with the expanding empire. B-level and C-level robots were invented to do some of the simpler tasks, but they lacked the ability to do complex procedures. A-level robots were sophisticated enough to do most jobs, but they were extremely expensive and rare to find.

One doctor invented a solution to this problem by creating humanoid animals with the ability to think, talk, and act like humans. This is a story of a Japanese captain of the ship named Blemen and her crew of lively humanoid animals. [DrCoke]