Like us on Facebook, follow us on Twitter! Check out our new tumblr page. :)
Manga News: Toriko has come to an end; but be sure to swing by and share your favourite moments from the series!
Manhwa & Manhua News: Check out the new Manhwa and Manhua shout-out (March 2016).
Event News: One Piece Awardshas concluded. Check the results Here!
MangaHelpers > Manga > Browse > Busou Renkin
Home
Chapters
Translations
Thread
RSS 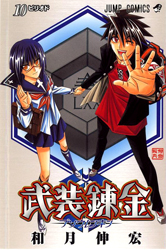 Buso Renkin is the story of teenager Kazuki Muto, who dies trying to save a girl who was being attacked by an eerie monster. The next morning, however, Kazuki is left wondering whether it was all a dream. Lo and behold, the girl, the monster, and his death are all real! The girl, Tokiko Tsumura, was actually trying to slay the homunculus (a beast that can take the form of humans, but whose main source of food is people), but Kazuki got in her way. To revive Kazuki, Tokiko replaces his heart with a "kakugane," an alchemic device that allows him to summon a lance with which to fight the monsters. It turns out that Tokiko is a member of Renkin Kenshi (Alchemist Soldiers), an organization sworn to protect the world from the diabolical creatures. Soon, Kazuki joins Tokiko in her quest to terminate the sinister being that creates and controls the homunculus.

Watsuki Nobuhiro is my favorite manga author! I am currently reading his Embalming series. Although I think I like his style earlier in his carrier better than now, although I like his new style also. Anyway, this series is pretty good. Anime too. Permalink " "