Like us on Facebook, follow us on Twitter! Check out our new tumblr page. :)
Manga News: Toriko has come to an end; but be sure to swing by and share your favourite moments from the series!
Manhwa & Manhua News: Check out the new Manhwa and Manhua shout-out (March 2016).
Event News: One Piece Awardshas concluded. Check the results Here!
MangaHelpers > Manga > Browse > Choujuu Densetsu Gestalt
Home
Chapters
Translations
RSS 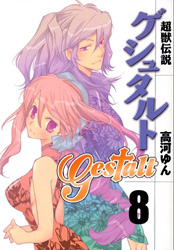 Father Olivier of the Order of Vasaria is having a religious crisis and has decided to seek out the evil beast god G (whose name we cannot speak), who is rumoured to be able to grant wishes. Along his journey, he meets a mysterious girl called Ohri, who claims to be a sorceress from G's island, who is returning home. Since they were both heading for the same place, they decided to journey together. However, Father Messiah of the Order of Vasaria is infuriated that Olivier has left the Order to seek out an evil god. And he has swallowed his pride to engage the services of Suzu, a Dark Elf, to capture Olivier and return him to the Order.

"Gestalt" is a German word and means "shape."