Like us on Facebook, follow us on Twitter! Check out our new tumblr page. :)
Manga News: Toriko has come to an end; but be sure to swing by and share your favourite moments from the series!
Manhwa & Manhua News: Check out the new Manhwa and Manhua shout-out (March 2016).
Event News: One Piece Awardshas concluded. Check the results Here!
MangaHelpers > Manga > Browse > One Outs
Home
Chapters
Translations
RSS 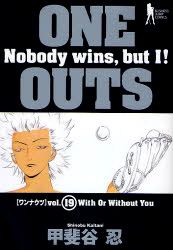 The story starts in Okinawa, in a training camp-- the ace batter of the Lycaons, a notoriously weak professional baseball team with a record of losses, Hiromichi Kojima, is trying to find out just why his team can never make it to the championships. During his training, he discovers the game of One Outs, a gambling derivative of baseball, and the game's champion, Toua Tokuchi.
The rule of the game is simple: if the pitcher can strike the batter out in three pitches, the pitcher wins.

From the same author as LIAR GAME, One outs is yet another fantastic psychological manga. Ace pitcher Tokuchi Toua joins a baseball team on a gambling contract--he gets money for every out he scores, but the penalty is nearly 10x for any runs scored on him. Using all sorts of loopholes, tricks, and psychological warfare, Tokuchi outrivals the opponent teams--as well as his team's owner's foul play. A very interesting and entertaining story, even if you aren't into sports manga like me.

If you're not into psychological style then you won't like this, since it contains heavy amounts of text. But it'll get your brain going, if that's your cup of tea. Permalink " "
Review by wholives

The author himself recalled in an interview, that when he first took One Outs to the editors of Business Jump he described it to them as a baseball version of Akagi (brilliant mahjong manga by Nobuyuki Fukumoto).
Personally I would say it's a pretty close description. However I would argue that One Outs is even more interesting than Akagi, because the protagonist does not rely on mind-boggling luck.

The story revolves around Toua Tokuchi - a gambler with an amazing talent for manipulation. He joins the professional baseball team the Lycaons (a manga parallel of the real world Seibu Lions) as a pitcher under the One Outs contract, where he earns a lot of money for every out he gets, and loses ten times more for every point costs the team. Initially, the greedy owner of the team agrees to the contract, in the belief that he wouldn't lose money overall - Tokuchi's physical ability is unremarkable, particularly in the world of pro baseball. But he gets a nasty surprise when Tokuchi starts earning millions using his ability to psychologically overwhelm his opponents.

You might like this if you like Liar Game (same author), Akagi (similar premise) or Kaiji (same author as Akagi), and you might like those if you like One Outs. Also Death Note, but I suspect many of you will have read that already. Nevertheless, it shares the same psychological aspect. Permalink " "
Review by Tsuna

Isn't anyone out there scanlating this series anymore? I'm a sad monkey :( Permalink " "