Like us on Facebook, follow us on Twitter! Check out our new tumblr page. :)
Manga News: Toriko has come to an end; but be sure to swing by and share your favourite moments from the series!
Manhwa & Manhua News: Check out the new Manhwa and Manhua shout-out (March 2016).
Event News: One Piece Awardshas concluded. Check the results Here!
MangaHelpers > Manga > Browse > ChunRangYulJun
Home
Chapters
Translations
RSS 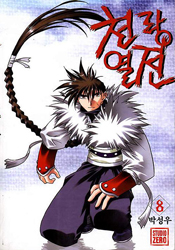 The mighty Kingdom of Goguryeo is in the midst of a war which has raged on for decades. In need of talented warriors to help lead their people, O’Rhang Yhun is sent on a mission by his master into enemy territory to find and bring back his eldest brother. However, just as O’Rhang departs on his mission, his master, a renown warrior and general of Goguryeo, passes away. Unfortunately for O’Rhang, his 2nd eldest brother has always been jealous of his martial arts potential and betrays O’Rhang by branding him as a traitor defecting to the enemy. Having been branded a traitor, he is pursued and nearly killed. As fate would have it though, O’Rhang is able to escape from his homeland barely managing to survive when a maiden as beautiful and graceful as an angel saves his life.
Join O’Rhang Yhun in this action packed adventure-love story to uncover the secret behind the martial arts his master passed onto him (Sa Shin Mu), his quest to find his oldest brother, and the score he has to settle with his 2nd eldest brother!