Like us on Facebook, follow us on Twitter! Check out our new tumblr page. :)
Manga News: Toriko has come to an end; but be sure to swing by and share your favourite moments from the series!
Manhwa & Manhua News: Check out the new Manhwa and Manhua shout-out (March 2016).
Event News: One Piece Awardshas concluded. Check the results Here!
MangaHelpers > Manga > Browse > Change Guy
Home
Chapters
Translations
Thread
RSS 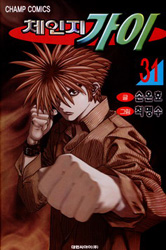 It's nature vs. nurture when a nerd swaps bodies with the toughest guy in school! Tuji and Usoo have swapped... their bodies! After becoming the subjects of a mad scientist's experiment with her latest invention - the quantum teleporter - their bodies are switched, leaving only their minds and spirits intact. Usoo, who was once a model student, must face the life of Tuji, a teenage menace. Never having had an enemy in his life, he now has to deal with the handful on Tuji's list, but will his kinder, gentler demeanor ward off his rivals? Or will survival determine his future? Will he become the hardened fighter that matches his new exterior?