Like us on Facebook, follow us on Twitter! Check out our new tumblr page. :)
Manga News: Toriko has come to an end; but be sure to swing by and share your favourite moments from the series!
Manhwa & Manhua News: Check out the new Manhwa and Manhua shout-out (March 2016).
Event News: One Piece Awardshas concluded. Check the results Here!
MangaHelpers > Manga > Browse > Clannad
Home
Chapters
Translations
RSS 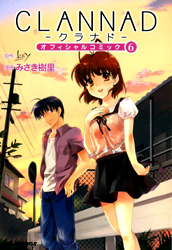 Clannad is set in a high-school located in a Japanese town. Tomoya Okazaki is a third-year student who doesn't take his studies seriously. Always late for class, he's seen as a delinquent by the rest of his classmates who are busy preparing for their entrance examinations. Needless to say, he doesn't have too many close friends either.

Tomoya seems not to mind too--until he meets a few other girls from his school. Though he doesn't care much about them at first, he soon opens his heart to them as they get to know each other better.

Clannad is a romantic youth drama that's likely to be more down-to-earth than Key's other works. But like Kanon and Air, Clannad's story is expected to be another touching and heart-breaking weeper.

Based off the game of the same name.