Like us on Facebook, follow us on Twitter! Check out our new tumblr page. :)
Manga News: Toriko has come to an end; but be sure to swing by and share your favourite moments from the series!
Manhwa & Manhua News: Check out the new Manhwa and Manhua shout-out (March 2016).
Event News: One Piece Awardshas concluded. Check the results Here!
MangaHelpers > Manga > Browse > Cyber Blue
Home
Chapters
Translations
RSS 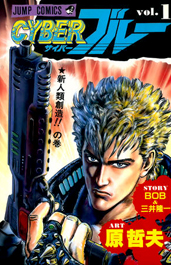 The year is 2305 on the colony planet Tinus where the atmosphere conditions are so terrible the inhabitants must wear medical instruments to stay alive. It has been 300 years since humans colonized this planet and the place has become a wasteland. Seventeen-year-old Blue lives in Junk City and through a series of events, acquires a 300 year 1st generation medical instrument robot and is also recruited by Wiser, the head of the Security Police Company (SPC), to crack down on a group of thieves. Blue stops the thieves but soon learns that it was a trap set by the corrupt Wiser to get rid of the “thieves,” who were really good. Wiser and the SPC shoot Blue multiple times who is presumed to be dead.
The 300 year old medical instrument, which Blue named Fautts, is touched by his innocence and combines himself with Blue. With Fautts’s brain power of an experienced computer and Blue’s human compassion, he is reborn as a cyborg. Now Blue must use his new powers to rid the planet of corruption and bring peace to the colony. Cyber Blue is created by the famous Hara Tetsuo, author of Hokuto no Ken (Fist of North Star) and it does not fail to deliver. Most definitely a read for any manga enthusiast. [vyc]