Like us on Facebook, follow us on Twitter! Check out our new tumblr page. :)
Manga News: Toriko has come to an end; but be sure to swing by and share your favourite moments from the series!
Manhwa & Manhua News: Check out the new Manhwa and Manhua shout-out (March 2016).
Event News: One Piece Awardshas concluded. Check the results Here!
MangaHelpers > Manga > Browse > Daughter of the Nile
Home
Chapters
Translations
RSS

Daughter of the Nile 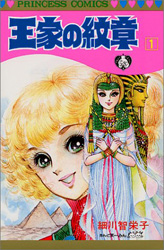 The main character is Carol, a blonde-haired, blue-eyed American teenager from a wealthy family with an interest in Egyptology studying in Cairo. When her mentor discovers the tomb of a young pharaoh, a curse is put on the excavation team and Carol. The curse sends her back in time to ancient Egypt, where she becomes embroiled in the affairs of Egypt and other ancient countries such as Assyria and Babylonia. Carol meets Memphis, a handsome young pharaoh whose tomb she excavated in modern times. Despite his headstrong and at first violent nature, they fall deeply in love. This angers Memphis's half-sister, the Priestess Isis, who has longed to marry him. Carol, due to her exotic looks and curious ability to tell the future, becomes a major player in ancient history.