Like us on Facebook, follow us on Twitter! Check out our new tumblr page. :)
Manga News: Toriko has come to an end; but be sure to swing by and share your favourite moments from the series!
Manhwa & Manhua News: Check out the new Manhwa and Manhua shout-out (March 2016).
Event News: One Piece Awardshas concluded. Check the results Here!
MangaHelpers > Manga > Browse > Denpa Kyoushi
Home
Chapters
Translations
Thread
RSS 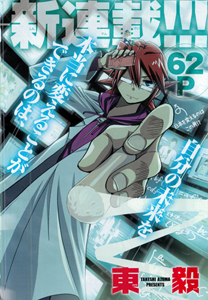 Kagami Junichirou was known as a physics genius when he was a teenager, and he was even published in "Nature." However, after college, he suddenly lost all interest in science. As a NEET, he's devoted himself to his anime blog and nerdy collecting habits. He claims he has a serious illness called "I can't do anything I don't want to do." Desperate to get him to do something with his life, his little sister manages to get him a job teaching physics at his old high school. He's certainly an unconventional teacher, but he becomes fairly popular with the students. After helping a girl who's being ruthlessly bullied, Kagami finds that he actually likes teaching. Will he continue his career as a weird teacher? Will he go back into physics? Or will he end up back where he started? [tethysdust]